Did you know that your body is an electrical generator? Nerves and muscles create electrical signals that deliver messages to and from your brain. Sensory nerves deliver information about your surroundings to the brain. Motor nerves deliver signals from the brain to activate your muscles.

Injuries or diseases that affect nerves and muscles can slow or halt the movement of these electrical signals. If you have pain, weakness or numbness in your back, neck or hands, measuring the speed and degree of electrical activity in your muscles and nerves can help your doctor make a proper diagnosis. This process is called electrodiagnostic testing.

These tests are usually administered by a neurologist (a doctor who specializes in the study of the nerves) or a physiatrist (a specialist in rehabilitation medicine). The tests can be done in less than an hour.

An EMG records and analyzes the electrical activity in your muscles. It is used to learn more about the functioning of nerves in the arms and legs. When a normal muscle is at rest, it is electrically silent. 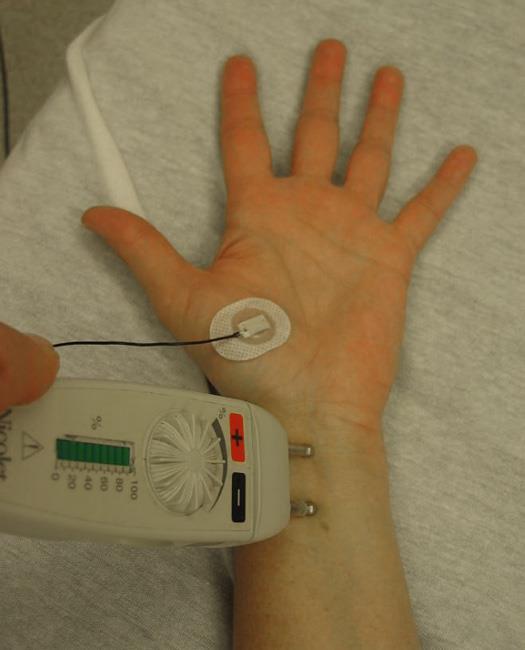 Close up of an EMG being performed with a nerve conduction study.

When the needles are removed, you may experience some soreness and bruising, but this will disappear in a few days. There are no long-term side effects.

If you are taking blood-thinning medications, have an illness, or are at risk for infection, tell the doctor who is conducting the test. On the day of the test, do not put any lotions or creams on the area to be tested and do not wear any jewelry. Usually, you can get the results immediately after the test.

NCS are often done along with the EMG to determine if a nerve is functioning normally. The doctor conducting the test will tape wires (electrodes) to the skin in various places along the nerve pathway. Then the doctor stimulates the nerve with an electric current. As the current travels down the nerve pathway, the electrodes placed along the way capture the signal and time how fast the signal is traveling. In healthy nerves, electrical signals can travel at up to 120 miles per hour. If the nerve is damaged, however, the signal will be slower and weaker. By stimulating the nerve at various places, the doctor can determine the specific site of the injury. Nerve conduction studies also may be used during treatment to test the progress being made.

Although you may initially be startled by the suddenness of the stimulation, it is not painful and most people are comfortable during the testing procedure. The shock is similar to one received when you touch a doorknob after walking across carpeting.

Your orthopaedist may recommend electrodiagnostic testing for various conditions that can result from pressure on a nerve, particularly in the arm, elbow or wrist. These conditions are called "compressive neuropathies" and include:

Many surgeons will order electrodiagnostic testing before recommending surgery for these conditions.

Electrodiagnostic testing also can be used to determine the extent of injury to a nerve after an accident and to study the effects of diseases such as diabetes. It can also show if an injured nerve is healing.

How Accurate Are the Tests?

The accuracy of electrodiagnostic tests depends on the skill of the person conducting the test and the precision of the equipment used. Generally, these tests can accurately determine injuries to the nerves or nerve roots, as well as diseases of the nerves and muscles. In some conditions, however, it may take several weeks for changes to become apparent.

Additionally, the tests cannot determine the existence or extent of pain. A person may still feel pain or exhibit symptoms even though electrodiagnostic tests show that the nerves are functioning normally. In these cases, your orthopaedist will recommend a course of treatment for you.