Cervical radiculopathy, commonly called a "pinched nerve," occurs when a nerve in the neck is compressed or irritated where it branches away from the spinal cord. This may cause pain that radiates into the shoulder and/or arm, as well as muscle weakness and numbness.

Cervical radiculopathy is often caused by "wear and tear" changes that occur in the spine as we age, such as arthritis. In younger people, it is most often caused by a sudden injury that results in a herniated disk. In some cases, however, there is no traumatic episode associated with the onset of symptoms.

In most cases, cervical radiculopathy responds well to conservative treatment that includes medication and physical therapy.

Your spine is made up of 24 bones, called vertebrae, that are stacked on top of one another. These bones connect to create a canal that protects the spinal cord. 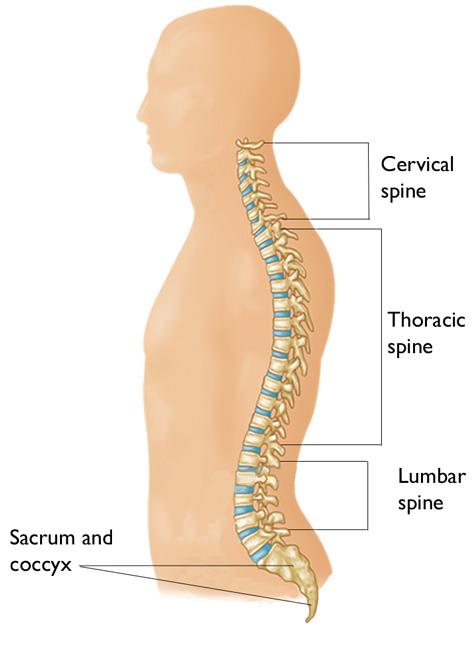 Cervical radiculopathy occurs in the cervical spine — the seven small vertebrae that form the neck.

Spinal cord and nerves. These "electrical cables" travel through the spinal canal carrying messages between your brain and muscles. Nerve roots branch out from the spinal cord through openings in the vertebrae (foramen). 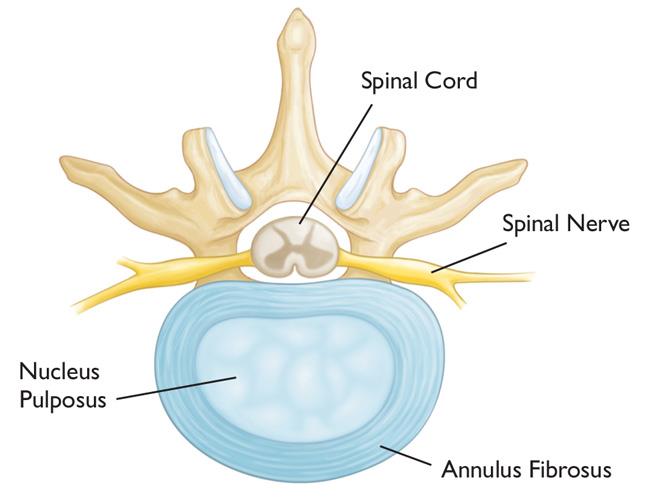 Cervical radiculopathy most often arises from degenerative changes that occur in the spine as we age or from an injury that causes a herniated, or bulging, intervertebral disk.

Degenerative changes. As the disks in the spine age, they lose height and begin to bulge. They also lose water content, begin to dry out, and become stiffer. This problem causes settling, or collapse, of the disk spaces and loss of disk space height.

As the disks lose height, the vertebrae move closer together. The body responds to the collapsed disk by forming more bone—called bone spurs—around the disk to strengthen it. These bone spurs contribute to the stiffening of the spine. They may also narrow the foramen—the small openings on each side of the spinal column where the nerve roots exit—and pinch the nerve root.

Degenerative changes in the disks are often called arthritis or spondylosis. These changes are normal and they occur in everyone. In fact, nearly half of all people middle-aged and older have worn disks and pinched nerves that do not cause painful symptoms. It is not known why some patients develop symptoms and others do not.

Herniated disk. A disk herniates when its jelly-like center (nucleus) pushes against its outer ring (annulus). If the disk is very worn or injured, the nucleus may squeeze all the way through. When the herniated disk bulges out toward the spinal canal, it puts pressure on the sensitive nerve root, causing pain and weakness in the area the nerve supplies. 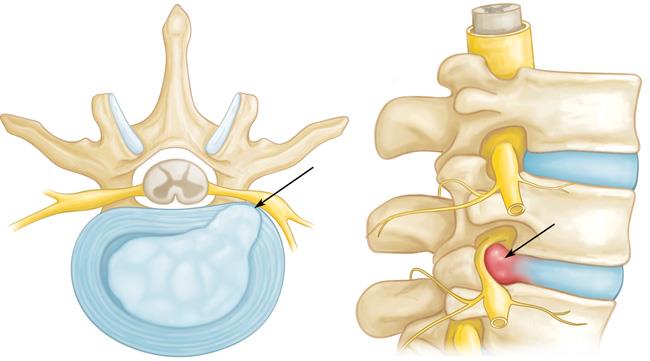 In a herniated disk, the soft, jelly-like center of the disk can push all the way through the outer ring.  (Side and cross-section views shown)

In most cases, the pain of cervical radiculopathy starts at the neck and travels down the arm in the area served by the damaged nerve. This pain is usually described as burning or sharp. Certain neck movements—like extending or straining the neck or turning the head—may increase the pain. Other symptoms include:

Some patients report that pain decreases when they place their hands on top of their head. This movement may temporarily relieve pressure on the nerve root.

Cervical Spondylosis (Arthritis of the Neck)

After discussing your medical history and general health, your doctor will ask you about your symptoms. He or she will then examine your neck, shoulder, arms and hands—looking for muscle weakness, loss of sensation, or any change in your reflexes.

Your doctor may also ask you to perform certain neck and arm movements to try to recreate and/or relieve your symptoms.

X-rays. These provide images of dense structures, such as bone. An x-ray will show the alignment of bones along your neck. It can also reveal whether there is any narrowing of the foramen and damage to the disks.

Computerized tomography (CT) scans. More detailed than a plain x-ray, a CT scan can help your doctor determine whether you have developed bone spurs near the foramen in your cervical spine.

Magnetic resonance imaging (MRI) scans. These studies create better images of the body's soft tissues. An MRI of the neck can show if your nerve compression is caused by damage to soft tissues—such as a bulging or herniated disk. It can also help your doctor determine whether there is any damage to your spinal cord or nerve roots.

Electromyography (EMG). Electromyography measures the electrical impulses of the muscles at rest and during contractions. Nerve conduction studies are often done along with EMG to determine if a nerve is functioning normally. Together, these tests can help your doctor determine whether your symptoms are caused by pressure on spinal nerve roots and nerve damage or by another condition that causes damage to nerves, such as diabetes. 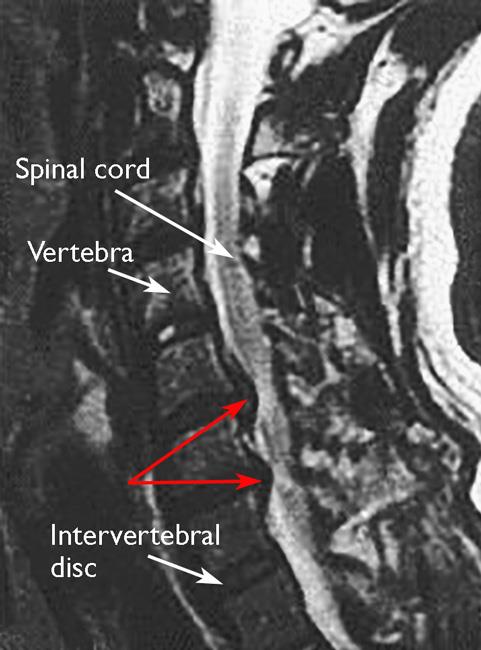 It is important to note that the majority of patients with cervical radiculopathy get better over time and do not need treatment. For some patients, the pain goes away relatively quickly—in days or weeks. For others, it may take longer.

It is also common for cervical radiculopathy that has improved to return at some point in the future. Even when this occurs, it usually gets better without any specific treatment.

In some cases, cervical radiculopathy does not improve, however. These patients require evaluation and treatment.

Soft cervical collar. This is a padded ring that wraps around the neck and is held in place with Velcro. Your doctor may advise you to wear a soft cervical collar to allow the muscles in your neck to rest and to limit neck motion. This can help decrease the pinching of the nerve roots that accompany movement of the neck. A soft collar should only be worn for a short period of time since long-term wear may decrease the strength of the muscles in your neck.

Physical therapy. Specific exercises can help relieve pain, strengthen neck muscles, and improve range of motion. In some cases, traction can be used to gently stretch the joints and muscles of the neck.

Steroid injection. In this procedure, steroids are injected near the affected nerve to reduce local inflammation. The injection may be placed between the laminae (epidural injection), in the foramen (selective nerve injection), or into the facet joint. Although steroid injections do not relieve the pressure on the nerve caused by a narrow foramen or by a bulging or herniated disk, they may lessen the swelling and relieve the pain long enough to allow the nerve to recover. Narcotics. These medications are reserved for patients with severe pain that is not relieved by other options. Narcotics are usually prescribed for a limited time only.

If, after a period of time, nonsurgical treatment does not relieve your symptoms, your doctor may recommend surgery. There are several surgical procedures to treat cervical radiculopathy. The procedure your doctor recommends will depend on many factors, including what symptoms you are experiencing and the location of the involved nerve root.