Perthes disease is a rare childhood condition that affects the hip. It occurs when the blood supply to the rounded head of the femur (thighbone) is temporarily disrupted. Without an adequate blood supply, the bone cells die, a process called avascular necrosis.

Although the term "disease" is still used, Perthes is really a complex process of stages that can last several years. As the condition progresses, the weakened bone of the head of the femur (the "ball" of the "ball-and-socket" joint of the hip) gradually begins to collapse. Over time, the blood supply to the head of the femur returns and the bone begins to grow back.

Treatment for Perthes focuses on helping the bone grow back into a more rounded shape that still fits into the socket of the hip joint. This will help the hip joint move normally and prevent hip problems in adulthood.

The long-term prognosis for children with Perthes is good in most cases. After 18 to 24 months of treatment, most children return to daily activities without major limitations. 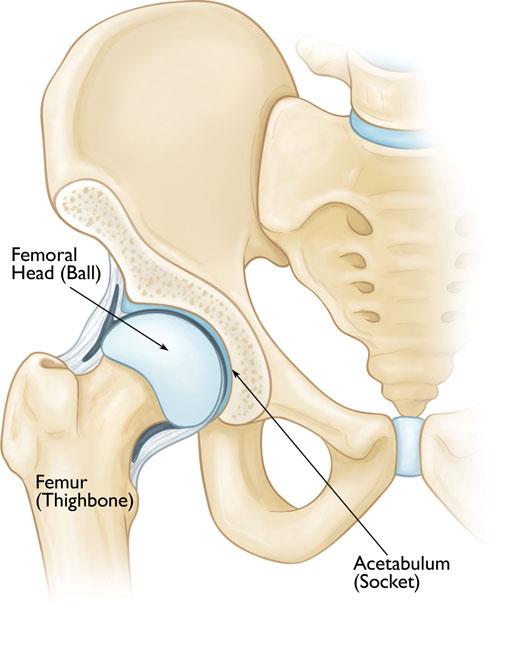 The hip is a "ball-and-socket" joint. The rounded head of the femur easily fits into the cup-shaped acetabulum to allow for a wide range of motion.

Perthes disease — also known as Legg-Calve-Perthes, named for the three individual doctors who first described the condition — typically occurs in children who are between 4 and 10 years old. It is five times more common in boys than in girls, however, it is likely to cause more extensive damage to the bone in girls. In 10% to 15% of all cases, both hips are affected. In the first stage of Perthes disease, the bone in the head of the femur slowly dies.

There are four stages in Perthes disease:

How to Use Crutches, Canes, and Walkers

The cause of Perthes disease is not known. Some recent studies indicate that there may be a genetic link to the development of Perthes, but more research needs to be conducted.

One of the earliest signs of Perthes is a change in the way your child walks and runs. This is often most apparent during sports activities. Your child may limp, have limited motion, or develop a peculiar running style, all due to irritability within the hip joint. Other common symptoms include:

Depending upon your child's activity level, symptoms may come and go over a period of weeks or even months before a doctor visit is considered.

After discussing your child's symptoms and medical history, your doctor will conduct a thorough physical examination. 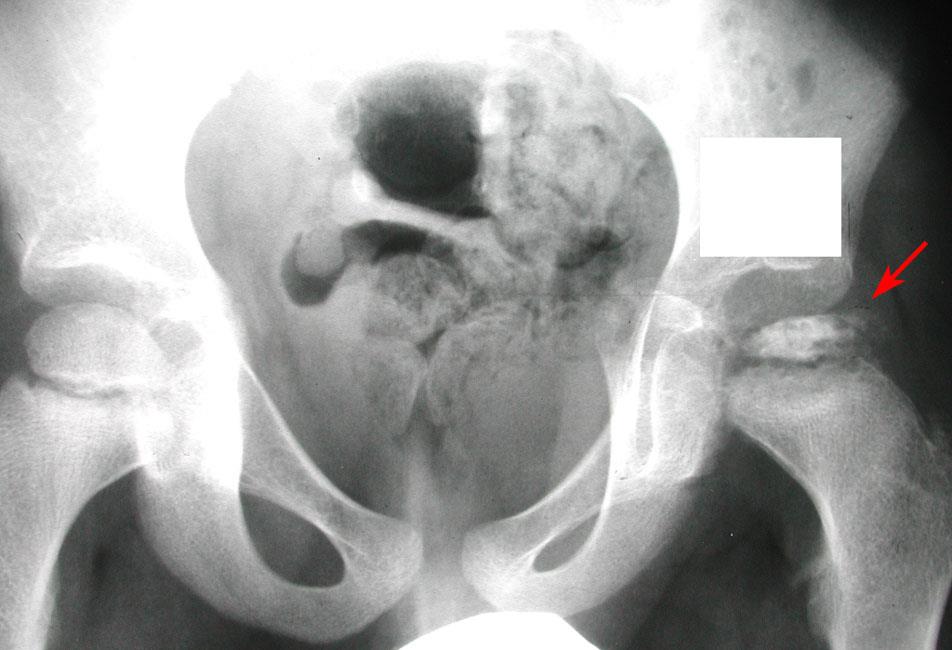 In this x-ray, Perthes disease has progressed to a collapse of the bone in the femoral head (arrow). The other side is normal.
Courtesy of Texas Scottish Rite Hospital for Children

A child with Perthes can expect to have several x-rays taken over the course of treatment, which may be 2 years or longer. As the condition progresses, x-rays often look worse before gradual improvement is seen.

The goal of treatment is to relieve painful symptoms, protect the shape of the femoral head, and restore normal hip movement. If left untreated, the femoral head can deform and not fit well within the acetabulum, which can lead to further hip problems in adulthood, such as early onset of arthritis.

There are many treatment options for Perthes disease. Your doctor will consider several factors when developing a treatment plan for your child, including:

Observation. For very young children (those 2 to 6 years old) who show few changes in the femoral head on their initial x-rays, the recommended treatment is usually simple observation. Your doctor will regularly monitor your child using x-rays to make sure the regrowth of the femoral head is on track as the disease runs its course.

Limiting activity. Avoiding high-impact activities, such as running and jumping, will help relieve pain and protect the femoral head. On occasion, your doctor may also recommend crutches or a walker to prevent your child from putting too much weight on the joint.

Casting and bracing. If range of motion becomes limited or if x-rays or other image scans indicate that a deformity is developing, a cast or brace may be used to keep the head of the femur in its normal position within the acetabulum.

Petrie casts are two long-leg casts with a bar that hold the legs spread apart in a position similar to the letter "A." Your doctor will most likely apply the initial Petrie cast in an operating room in order to have access to specific equipment.

Petrie casts keep the legs spread far apart in an effort to maintain the hips in the best position for healing.
Courtesy of Texas Scottish Rite Hospital for Children

After the cast is removed, usually after 4 to 6 weeks, physical therapy exercises are resumed to restore motion in the hips and knees. Your doctor may recommend continued intermittent casting until the hip enters the final stage of the healing process.

Your doctor may recommend surgery to re-establish the proper alignment of the bones of the hip and to keep the head of the femur deep within the acetabulum until healing is complete. Surgery is most often recommended when:

The most common surgical procedure for treating Perthes disease is an osteotomy. In this type of procedure, the bone is cut and repositioned to keep the femoral head snug within the acetabulum. This alignment is kept in place with screws and plates, which will be removed after the healed stage of the disease. 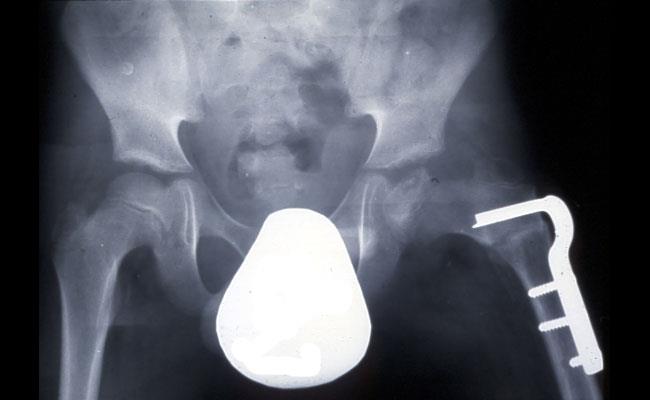 An osteotomy of the femur places the femoral head in a better position to heal.
Courtesy of Texas Scottish Rite Hospital for Children

In many cases, the femur bone is cut to realign the joint. Sometimes, the socket must also be made deeper because the head of the femur has actually enlarged during the healing process and no longer fits snugly within it. After either procedure, the child is usually placed in a cast for several weeks to protect the alignment.

After the cast is removed, physical therapy will be needed to restore muscle strength and range of motion. Crutches or a walker will be necessary to reduce weightbearing on the affected hip. Your doctor will continue to monitor the hip with x-rays through the final stages of healing.

In most cases, the long-term prognosis for children with Perthes is good and they grow into adulthood without further hip problems.