When Katie Morgan was a baby, she was diagnosed with a Chiari malformation in her brain. The malformation is characterized by an elongation of the cerebral tonsils, or small lobes at the base of the brain, through the opening at the base of the skull. This impacts the flow of cerebrospinal fluid and can cause numerous issues including headaches, dizziness, and problems with the arms and legs.

At only three years old, Katie endured a series of decompression surgeries. Fortunately, these surgeries relieved the symptoms she was having.

Four years later, Katie wasn't feeling well. She was taken to the doctor, who x-rayed her chest to rule out pneumonia. The x-rays revealed an abnormal curvature of her spine. Thought to be caused by residual pockets of fluid in her spinal cord from the Chiari malformation, Katie was diagnosed with scoliosis. At the time, Katie's spinal curves were fairly mild at 14 degrees. For five years, Katie's scoliosis was treated with a rigid back brace to slow the progression of the curves. Katie had to wear the brace for 22 hours a day. "This made sleepovers and other activities a bit challenging," her mother Kris recalls. "She would have to wear the brace wherever she went which was very uncomfortable. It really limited the activities that she could participate in with her friends." Shopping for clothes was difficult, as fitting garments around the brace was always a factor and her choices were limited.

Idiopathic Scoliosis in Children and Adolescents

When Katie was 11, she started having increased pain in her upper back. She was experiencing shortness of breath. X-rays showed that Katie's spinal curves had progressed to 62 degrees, and surgery was necessary.

On February 4, 2013, David Polly, Jr., MD, an orthopaedic spine surgeon at the University of Minnesota with expertise in scoliosis, operated on the sixth grader. There were complications during Katie's surgery. She had laxity and sensitivity in her spinal cord, and had become paralyzed on the right side. At that point, they stopped the surgery and brought Katie out of anesthesia. Fortunately, she recovered from the paralysis, and was to go back into surgery after four days to finish the surgery. Although it was a very scary situation, Katie and her parents trusted Dr. Polly.

During Katie's second surgery, the same issues arose. "It was decided to leave a few of the screws out, at the site where the spinal cord was most sensitive," Kris explains. "This seemed to do the trick and surgery was completed." 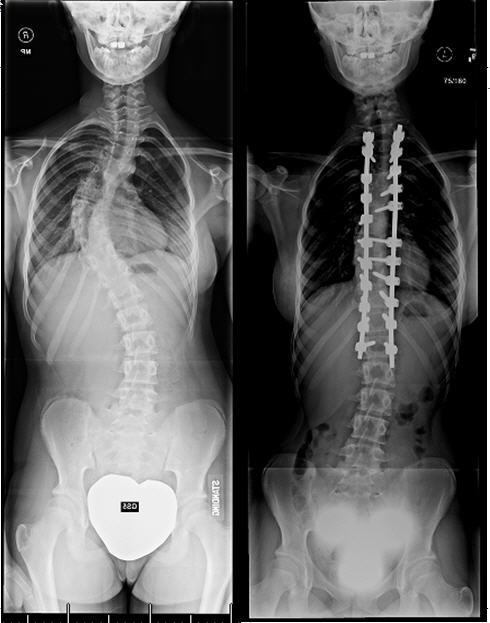 Dr. Polly ultimately performed a posterior spinal fusion of Katie's T2-L1 vertebrae with instrumentation. A series of rods and screws now hold her spine straight. "The pain that she was experiencing before surgery is now gone," Kris reports. Katie no longer requires a brace. "The overall change that I have noticed is in her attitude and demeanor. At first after the surgery she thought the scar was ugly and didn't want anyone to see it. Now a year later, she looks at the scar as a testimony."

Now 13 years old, Katie is thrilled to be able to shop for clothes and participate in almost any activity with her friends. She spends much of her time in the pool or riding her bike and her parents are delighted to have a thriving, beautiful, and healthy daughter.

"Her strength and courage as she faced surgery and the recovery time after the surgery was inspiring," Kris says. "My hope for Katie is that she continues to have the strength and faith that she has now, no matter what she may face in her future."