As a carefree and happy 10-year-old, Rachel Parsons had no idea she would spend the next four years of her life confined to a series of rigid and restrictive back braces. In fifth grade, Rachel was taken to her doctor to be evaluated for pneumonia. A chest x-ray revealed that her hips were uneven and she had an S-shaped curvature in her spine, known as scoliosis.

Initially, Rachel's spinal curves were mild, but as she continued to grow, her curves worsened. To prevent further progression of the disease, Rachel had to wear a brace for 22 hours a day. "The back braces would constantly rub my torso and leave wounds," she says. "It was extremely uncomfortable and painful."

Idiopathic Scoliosis in Children and Adolescents

After she was diagnosed, Rachel continued to play on a soccer team for a while, but ultimately stopped due to pain and the inconvenience of the back brace. "It was embarrassing and a hassle to take my brace off," Rachel says. In the two hours she was allowed each day to be without the brace, she had to fit in soccer games or practice, a shower, and making sure her brace was cleaned properly with rubbing alcohol.

Rachel had difficulty fitting in at school, and had trouble finding clothes that could be worn over the braces. She grew discouraged and became shy and withdrawn. The progression of the spinal deformity increased pressure on her lungs, causing shortness of breath. Once a trumpet player, Rachel was forced to quit playing in the band because she was having trouble breathing.

By age 14, Rachel was in constant pain and her spine had become severely deformed. Her spine kept growing after her growth plates had fused, and it was evident that surgery was necessary. R. Dale Blasier, MD, an orthopaedic surgeon at Arkansas Children's Hospital who had been treating her since her diagnosis, surgically inserted two titanium rods and a series of screws to permanently straighten her spine. 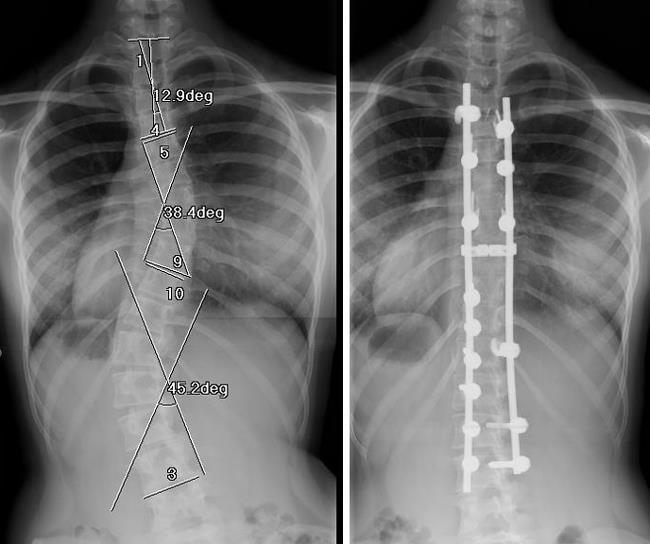 After recovering from the surgery, Rachel became more social and joined several clubs at her school and within her community. She took up photography as a hobby and as a focus in her high school courses. "I gained so much self-esteem and felt unstoppable."

Rachel's quality of life drastically improved, although she still experiences intermittent pain. "I can breathe easier and have little issues with my back," she proclaims. "I don't have to worry about breathing issues or pressure on my lungs and internal organs."

Rachel is now at peace that she will be able to lead a normal life and pursue her dreams. She is currently working toward her bachelor's and master's degrees in social work at the University of Arkansas. She hopes to become a licensed social worker and work with the geriatric population.

The progressive spinal deformity of scoliosis has no known cause. Although it is seen more frequently in females than males, scoliosis does not discriminate by race or ethnicity. "I wish to see the day that no one has to endure the physical and emotional pain that I endured," Rachel states. "Advances in research will give us the answer and tools to allow those with scoliosis the chance to live life without any fear of life-threatening health concerns."