Congenital hand differences develop early during pregnancy when the baby's upper limbs are first forming. Sometimes, a difference runs in a family or is part of a medical condition. But in many cases, doctors are not able to determine the exact cause for a hand difference.

Having a hand difference can be both physically and emotionally challenging, but many children are able to adapt and function well without any treatment. Some children may need occupational therapy, surgery, or other treatments to function better and be more independent.

What Is a Pediatric Orthopaedic Surgeon?

Congenital hand differences can affect both the shape and function of a child's hand and arm. They occur in approximately 2 out of 1,000 live births and are more common in boys than girls.

Hand differences are not usually detected before birth. Occasionally, a difference such as extra fingers or missing bones can be seen on a prenatal ultrasound, but this is rare.

Malformations occur about 4 to 8 weeks after conception — when the baby's upper limbs are first developing. Deformations and dysplasias can occur later in pregnancy.

Sometimes, a congenital hand difference is associated with a medical condition or syndrome that affects multiple parts of the body. Hand differences may also be hereditary — they can be passed along through a family.

In the majority of cases, however, the cause for a hand difference is simply unknown — doctors are not able to determine why it has occurred.

There are many types of hand differences, and the variance from a normal hand can be either major or minor. Some of the more common conditions are described below.

Syndactyly, the most common congenital hand difference, is an abnormal connection of the fingers to one another. In babies born with syndactyly, the fingers are webbed or fused together because they did not separate normally during development. In complex syndactyly, the bones in the affected fingers are fused together.
Courtesy of Shriners Hospital for Children—Northern California

The condition can take a number of forms, including:

Syndactyly often runs in families and can occur alone or as part of a medical condition such as Apert syndrome or Poland syndrome.

Polydactyly, with an extra little finger.
Courtesy of Shriners Hospital for Children—Northern California

Polydactyly is the presence of one or more extra fingers on the hand. An extra finger may be small and nonfunctional — made of only skin and soft tissue — or may be fully formed with bones of its own.

Polydactyly often runs in families and is sometimes associated with other medical conditions or syndromes. In some cases, babies born with polydactyly will have syndactyly as well.

A baby with an upper limb deficiency may be born with hands or arms that are smaller than normal or are missing. Some of the more common limb deficiencies are described below.

In a radial deficiency, the radius bone and soft tissues in the forearm fail to develop properly. This causes the affected hand to be bent inward toward the thumb side of the forearm, giving it the appearance of a club hand. 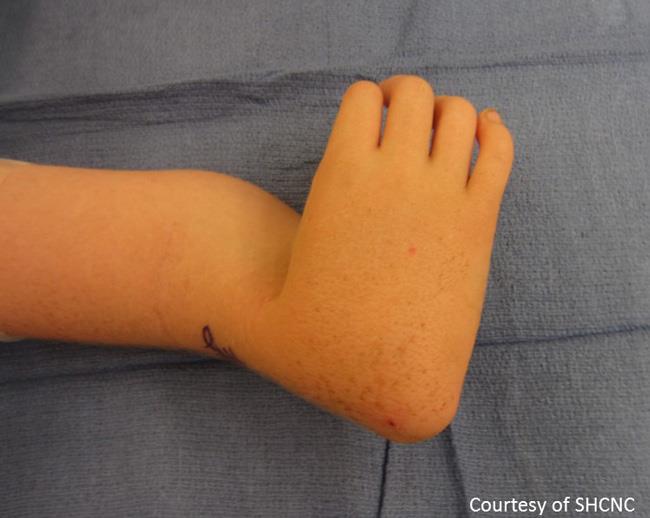 In a radial deficiency the hand is turned inward, giving it a club-like appearance.

The forearm may also be shortened, and the thumb may be smaller and weaker than normal or missing — a condition known as thumb hypoplasia. Thumb hypoplasia may cause a child's thumb to be absent or underdeveloped.
Courtesy of Shriners Hospital for Children—Northern California

Some types of radial deficiency run in families, while others are related to congenital differences in the heart, kidneys, and blood system. To determine whether a radial deficiency is caused by an underlying medical condition, the doctor may recommend that your child undergo thorough evaluation by a pediatrician and/or a geneticist.

In a transverse deficiency, all of the elements below a certain level in the patient's arm are missing. The condition has an appearance similar to that of an amputation and is sometimes known as congenital amputation. 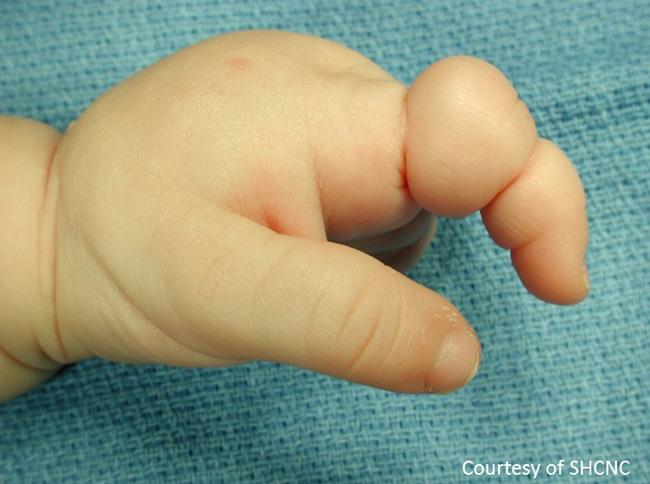 Amniotic bands can encircle the developing baby's fingers or other body parts.
Courtesy of Shriners Hospital for Children—Northern California

The amnion is the membrane that surrounds and protects the developing baby. If the amnion ruptures or tears during pregnancy, it is possible for detached strands of the membrane to wrap around the growing baby's body parts and cause injury — a condition known as amniotic band syndrome (ABS).

In milder cases, these strands, which are called amniotic bands, may cause only a minor groove or indentation in one of the baby's fingers or limbs.

In the most serious cases, an amniotic band may be tight enough to restrict blood flow to the developing baby's body parts. This can lead to the amputation of fingers or parts of the arm before the baby is born.

Most congenital hand differences can be detected soon after birth.

A pediatrician will perform a careful examination of your child's hand and arm and, in most cases, will be able to diagnose the specific type of hand difference.

Some cases are more complex and have more than one feature, however, and the pediatrician may refer your child to a specialist — such as a pediatric orthopaedic surgeon or pediatric hand surgeon — to ensure the correct diagnosis.

Your child's doctor may order tests to confirm a diagnosis or to help plan your child's treatment.

X-rays. X-rays provides images of dense structures, such as bone. Your child's doctor may order X-rays to determine which bones in your child's hands and arm are affected.

Genetic testing. An evaluation by a genetic specialist may be recommended for children with certain hereditary hand differences or differences caused by medical conditions or syndromes.

Additional tests. If the hand difference is associated with a medical condition or syndrome, your child's doctor may recommend additional tests to determine if other parts of your child's body are affected, such as the heart or kidneys.

The goal of treatment is to improve the function and appearance of the affected hand as much as possible.

While some children are able to adapt to hand differences and function well without treatment, others may need therapy or surgery to be more independent and able to participate in certain activities.

Your child's doctor will consider many things when determining treatment, including:

Nonsurgical treatment for hand differences often includes one or more of the following:

There are several surgical procedures used to treat congenital hand differences. The procedure your child's doctor recommends — as well as the age at which the procedure is performed — will depend upon your child's specific condition and the type of surgery.

Surgical procedures for hand differences include:

Establishing peer contacts for both your child and your family is a very important part of treatment. Meeting other children with hand differences and their families will provide reassurance that you are not alone and can be an invaluable source of information and support.

You can find many support groups and discussion groups online. In addition, some children's hospitals and other organizations sponsor Hand Camps for children with differences, such as the nonprofit Hands to Love. These camps provide a safe and encouraging environment for children to socialize and participate in camp activities with other children who have congenital hand differences.

Many research studies have shown that children with congenital hand differences have a very high quality of life. Although they may do some tasks differently, it's often amazing what they can accomplish.

There is some evidence that having a minor hand difference can actually have a greater psychological impact on a child than a more significant difference. If your child is struggling with either the emotional or physical aspects of having a hand difference, it is important to be supportive and encouraging, and to share your concerns with your child's doctor.

Statistical data in this article was reviewed by the AAOS Department of Research and Scientific Affairs.